Writing methods: mixing it up 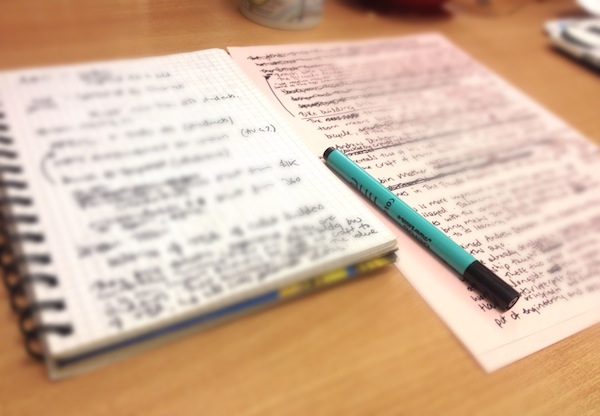 Today, The Times newspaper ran with its own PR story – about the experimental revival of typewriters in newsrooms. These haven’t really been reintroduced as writing tools; instead, those working in the paper’s newsroom are now subject to piped in tapping noises from old-fashioned typewriters.

In a strange bid to boost the energy of Times journalists, the typing noises are reported to start off slowly, building up to a clattering crescendo.

Some tweets posted earlier today by said experiment’s subjects – many of whom will never have worked using a typewriter – show the decision to have had more of an impact on irritation levels, than productivity.

While this is all perhaps a little bit bonkers, and almost undoubtedly more temporary PR stunt than long-term working arrangement for those in The Times’ newsroom, there is something in all of this. We’re often to be found working with trusted pens, pencils and paper, as a welcome break from the screen. Being faced with a crisp, clean piece of paper demanding good-looking, well composed copy forces you into a different way of working. It encourages the more immediate structure and flow to writing that screen-writing permits you to leave until later. Visually, it presents the resulting story, press release or copy differently, focusing the mind. A welcome break too from new emails, Twitter prompts, Facebook updates and all other interfering reminders the computer and phone kindly ping away with.

Mixing up ways of working and writing, combined of course with a good level of office conversation, banter, music and cakes/sweets/coffee/tea is the trick to stimulating productivity. We think.