Press release issued for the Inn at Freshford, a country pub just outside Bath 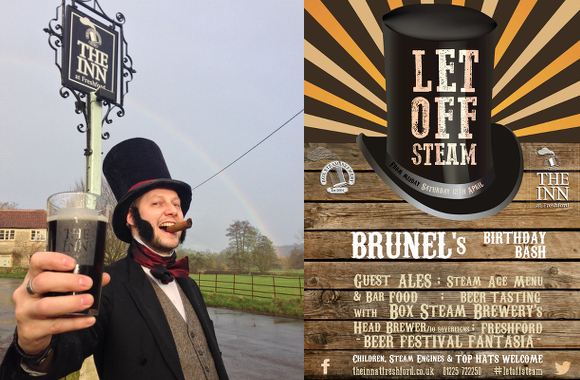 Landlord of the Inn at Freshford Mike Parkin, celebrates the pub’s forthcoming Brunel-inspired beer festival. On Saturday 12th April, the village inn will play host to Let Off Steam, an event which will include steam engines, the Holt Morris Men and Box Steam Brewery beer tasting

THE Inn at Freshford is celebrating Isambard Kingdom Brunel’s birthday on Saturday April 12 with its inaugural Let Off Steam Beer Festival.

Bar staff dressed in traditional Victorian attire will serve up a specially designed steam age food menu, as well as a range of Brunel-inspired beers and guest ales. Aptly named tipples will range from Tunnel Vision to Derail Ale.

Let Off Steam Beer Festival marks Brunel’s 208th birthday and the respective 150th and 160th anniversaries of the Clifton Suspension Bridge and Paddington Station – two of the iconic engineer’s most acclaimed projects.

“Trains from the Great Western Railway stop at Freshford on a daily basis and Box Tunnel-inspired beers run through our pumps, so it’s only right we raise a glass to Isambard on his birthday,” said Mike Parkin, landlord at The Inn at Freshford.

“While the kids step back in time and discover how the great man influenced local engineering and architecture, parents can get a taste of how Brunel inspired local beer brewers.

“It’s going to be an interesting and thirst quenching day of Brunel celebrations, with top hats galore.”

The Let Off Steam Beer Festival starts at midday and is free. The beer tasting and Brunel talk starts at 4pm. Tickets cost £10 and can be purchased on the day, or in advance by calling 01225 722250.

For more updates on the event, follow @InnatFreshford on Twitter and look out for the #letoffsteam hashtag, or visit Facebook.com/theinnatfreshford.