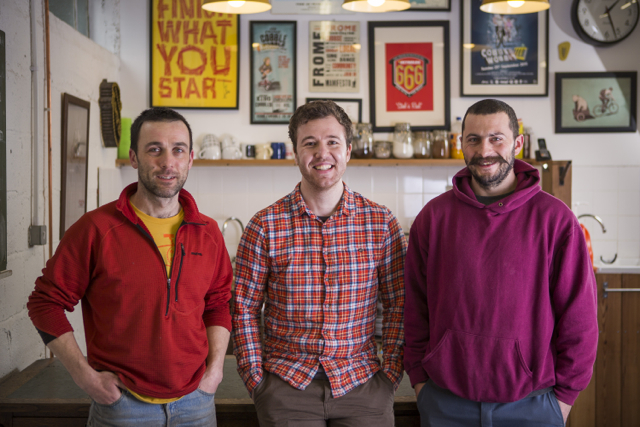 This year, The Bicycle Academy’s Somerset-based frame building school is on course for even better grades, thanks to the addition of two British bicycle building masters.

Builder of the 2012 Best in Show at the UK Hand Made Bicycle Show, Bespoked, Robin brings more than 20 years of frame building expertise; Ted, winner of the show’s 2013 Peer Award brings his distinctive engineering style to The Bicycle Academy (TBA).

Andrew says that after opening TBA’s doors 18 months ago, he is honoured to welcome two of his personal heroes to his successful team.

“The quality of their workmanship and range of techniques used means we can move up another gear and offer students an even richer experience.”

Commenting on his new role with TBA, Robin says he has always felt it important for practising craftsmen to pass on and share their skills, to encourage the development of new ideas and improve standards.  He says his career has benefitted from what he describes as a “culture of openness” in the bicycle building industry.

“The opportunity to work with TBA is really exciting.

“I have been very impressed with how much it has achieved in a relatively short time and honoured that they want me to be a part of it. I strongly support Andrew’s approach, in providing students with a framework for meaningful practice and feel that this is more likely to produce a long term interest in the craft.”

Ted says that he had always hoped to join The Bicycle Academy, after deciding to move out of London and head west:

“I will now finally be joining the team and teaching frame building courses.

“Andrew and I have been discussing ideas for additional courses where I can share some of the different things I do on a daily basis.  We have also been working on some similar projects involving frame building tools – something else that we will all be developing together.”

Andrew adds that Robin and Ted will continue with their own projects, while their hands on involvement with TBA will mean it can offer tuition covering a broad range of frame building techniques, using the layered teaching style on which its founder has built its reputation.

In early January, details for a new frame building role at the bicycle school’s premises in Frome, Somerset, were posted online, resulting in a surge of interest and a temporary TBA website crash.

Andrew admits he was quite overwhelmed by this reaction:

“We had a lot of interest, of an impressive level, from across the world.  I suppose it really affirmed what we were doing and just how far we have come in 18 months.

“I’ve looked up to Ted and Robin for a number of years so to be working with them is a dream come true.  Their work speaks for itself but it’s the passion they have for what they do that makes them the perfect fit here.”

As well as attracting talent in the form of its founder’s heroes, the consistency of The Bicycle Academy’s students’ results means well-established bike builders and manufacturers are also watching the young school with a keen eye.

“We receive regular ‘how are you doing that?’ enquiries from some of the top professionals and manufacturing companies, keen to understand how our novice students are excelling at advanced frame building techniques within such a short time.”

The Bicycle Academy offers focused tuition to novices, enthusiasts and professionals, and to date, has taught more than 250 students from across the world.  Its frame building courses start from £1,000, with 1:1 skills master classes starting at £360 a day.

Launched in July 2012, following a successful crowd funding campaign, The Bicycle Academy is the most popular frame building school in the UK, with students coming from all over the world to study at the Frome-based school.

In 2012 TBA was selected as “One of the 100 most resourceful, original, exciting and disruptive small businesses in the UK” by Smarta, and was the winner of the “Spirit of Cycling” award at the UK Handmade Bicycle Show (UKHBS) in 2013, for positive contribution to the UK hand made bicycle scene.

Along with teaching novices it is uniquely used by the professional frame building community to refine particular skills.  Past students include Donhou Bicycles, Paulus Quiros, 18 bikes and Johnson Frameworks.

Andrew Denham
Founder of The Bicycle Academy, head teacher and the guardian of the Brian Curtis method of fillet brazing. Andrew is also the organiser of the “World Famous Cobble Wobble” annual bicycle hill climb sprint, held in Frome and sponsored by Red Bull and Charge Bikes.

Robin Mather
Winner of “Best in Show” at Bespoked the UKHBS in 2012, Robin has been building custom bicycles for more than 20 years.

Ted James
Joint winner of the “Peer Award” at Bespoked the UKHBS in 2013, Ted has been building custom bicycles for more than 5 years.
 
Media contact:
press@thebicycleacademy.org
01373 473767