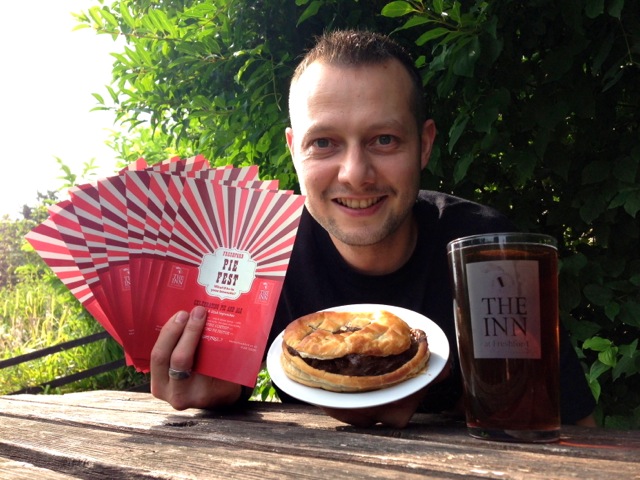 PIE FEVER will take hold of Freshford on the weekend of September 21 for Bath’s first pie festival.

The beer garden of the village’s historic Inn at Freshford will play host to an array of locally produced pastry-based snacks, complementary guest ales, live bands and local arts and crafts, as part of its inaugural ‘Pie Fest’.

The weekend event will culminate in a Pie-Factor competition and a Man v Food-style charity pie eating contest – with all funds raised going to the national charity Holidays With Help, as well as Freshford Primary School.

Pie Fest will coincide with the start of British Food Fortnight and mark the launch of The Inn at Freshford’s new seasonal food menu. 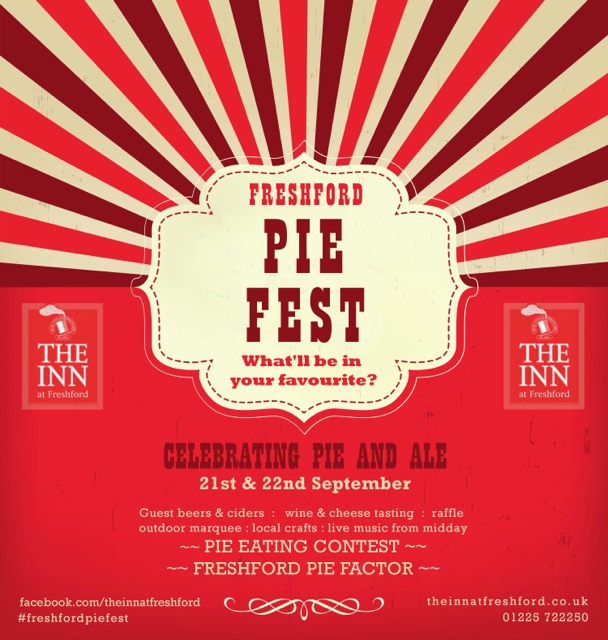 Mike Parkin, the new landlord of The Inn at Freshford, said: “Throughout the weekend we’re inviting local bakeries, chefs and keen amateur bakers to submit their signature pies or family recipe pies in our ‘Pie Factor’ competition.

“The pie maker behind the winning entry will be announced by local judges on the Sunday and will win a three-course meal for two and have their recipe adorned on our pub Hall Of Fame for all to see.”

Mike explained the cherry on top of Pie Fest 2013 will be the ‘Man v Pie’ eating contest on the Sunday afternoon.

“The quickest pie muncher will be crowned king of Pie Fest 2013, winning the illustrious Pie Fest trophy and a gift-set of Box Steam Ales – to be enjoyed at a more leisurely pace, we hope.”

There will be four varieties of pie created especially for Pie Fest – rabbit and cider pie, fish pie, Stilton and vegetable, and chicken and tarragon pie.  Each will be served with a matching guest ale.

Live music throughout the weekend will include Derrick Oldroyde, Fergusson Elliott, Pete Gage and Tall Order, as well as DJ sets later in the evening.

Mike added:  “Hungry revellers will be able to enjoy ‘pie-nics’ in the beer garden, arts and crafts from the local parish in a marquee, wine and cheese tasting in the bar courtesy of Heritage Wines, a raffle and an exhibition of local art.

“The pie is a Great British favourite, so we’re confident Pie Fest will inspire and whet the appetite of Bath’s pie lovers.

“We think it’s a great way to end the summer and say goodbye to the beach-fit diets.”

As part of Pie Fest, The Inn at Freshford will be delivering a batch of pies to Julian House – a Bath-based charity for homeless people.

Follow @InnatFreshford and look out for #freshfordpiefest on Twitter, or visit Facebook.com/theinnatfreshford for more on Freshford Pie Fest.

Pie facts
π   Pies date back to about 9500BC in New Stone Age, – that’s about 5000 years before man invented the wheel.
π   Modern-style pies originated in Ancient Greece as a useful means of transporting food on long sea journeys.
π   The first reference to pies in England ‘occurred in the 14th century – albeit in Latin as ‘pyes’. Even literary greats such as William Shakespeare mentioned pies in his plays.
π   The word ‘pasty’ began life as a term for a game filled pie, baked without a dish. The history books show Henry VI was served a partridge and peacock-filled ‘pastie’ aged 8-years-old.
π   It wasn’t until the 17th and 18th century that pasties were taken up by Cornish miners, who filled one half with meat and the other half with jam – providing both a main course and dessert for their subterranean work.
π   The phrase ‘to eat humble pie’ comes from umble pie, a pastry-based dish filled with chopped or minced innards. The word umble derives from ‘numble’, meaning deer’s innards. The cheap offal filling meant it was more commonly eaten by the poor. Despite it being a seemingly humble meal, there is no etymological link between ‘umble’ and ‘humble’.
π   The mince pies we eat at Christmas today date back to 13th century when European crusaders returned home from the Middle East with recipes containing meats, fruits and spices. Up until the Victorian age, festive mince pies often contained beef, veal or mutton.
π   In the 17th century mince pies were banned by Oliver Cromwell.
π   Pork pies make up £145 million of a £1 billion pie industry in the UK.