Press release issued for Pie Fest host the Inn at Freshford, a Somerset country pub on the outskirts of Bath 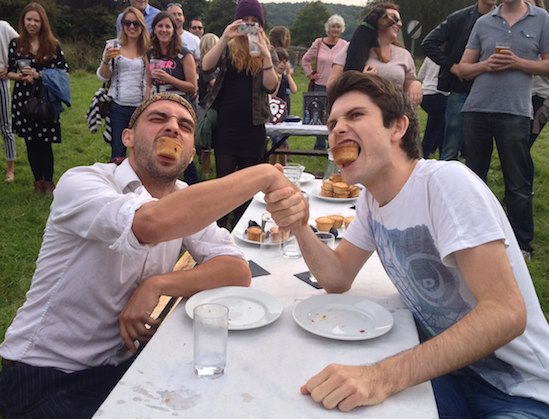 Pie Fest showdown at the Inn at Freshford: Matt Tudge, left, and Robin Wells, right before the ‘pie-off’ to decide the Man vs Pie 2014 winner

When Bradford On Avon’s Matt Tudge finished the speed eating competition with nine pies under his belt, 2013 champion Robin looked to have lost his title. But after a steward’s enquiry, Matt was deemed to have broken the rules by drinking more than the one allocated cup of water.

The pair then had to go head to head in a tense ‘pie-breaker’ to decide the winner, with Robin eventually eating a single pork pie in the faster time of 54 seconds.

Despite travelling more than 3,500 miles to take part in Man Vs Pie, Siberian Peter Piestrovsky was disqualified in disgrace when judges discovered he had concealed eight pork pies in his pockets – as well as fed one to an onlooker’s dog.

Pie Fest II’s Man Vs Pie contest attracted a crowd of more than 100 people. All funds raised from the event (which are still being counted) will go to the Wiltshire Air Ambulance and Freshford Church of England Primary School.

Robin, who smashed his personal best of seven pork pies to lift the Man Vs Pie shield for the second year in a row, said: “I had the serious shakes when it went to the pie-breaker, but I knew deep down I had the pie of tiger to clinch the Man Vs Pie trophy again.

“And despite eating one more pie than in 2013, I still managed to eat steak for my dinner.”

Liz Nelson, owner of Farleigh Road Farm Shop and Café, said: “Our cook’s pie was as scrumptious as it was big and we’re absolutely thrilled it won over the festival goers taste buds.”