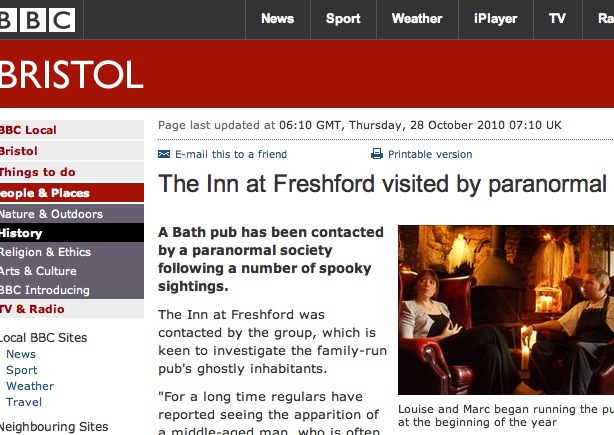 In autumn 2010, the Inn at Freshford’s ghostly quiet bar was far more likely to be frequented by its spooky regulars than mortal, paying customers

Two years ago we were contacted to help a Somerset pub raise its profile. It had been abandoned by its locals and wasn’t attracting new customers quickly. In autumn 2010, the Inn at Freshford’s ghostly quiet bar was more likely to be frequented by its spooky regulars than mortal, paying customers.

We love a challenge. How to build the business of a public house no longer at the heart of its community? How to attract new customers to a place with no passing traffic? Had we been contacted earlier in the year, our PR recommendations would have been less frightening I’m sure, but in the build up to Halloween, there was only one place to start – with a good ghost story. A quick chat with the Inn at Freshford’s then management team revealed the pub had plenty of tales, which with our input, generated plenty of media attention, such as this on BBC Bristol.

Since, the pub has been given a further welcome lease of life from one of the UK’s most charismatic landlords, Mark Birchall, which whom we have worked to rebuild the Inn at Freshford’s local connection. A healthy and continued injection of public relations from Avalanche, in the form of press releases, media attention, event and campaign organising, journalist reviews and social media activity across Facebook, Twitter, Instagram and Pinterest, has all helped to revitalise the Inn at Freshford’s reputation.

It takes time to make this sort of difference, plus consistency, PR planning and focusing the product offering. The Inn at Freshford knows what it is – and just as importantly, what it isn’t. We’re always learning in our work with clients and have applied a lot of the lessons learned from our work with this great country pub to other businesses.

For pubs and businesses needing a happy ending, we are reputation ghostbusters for hire.