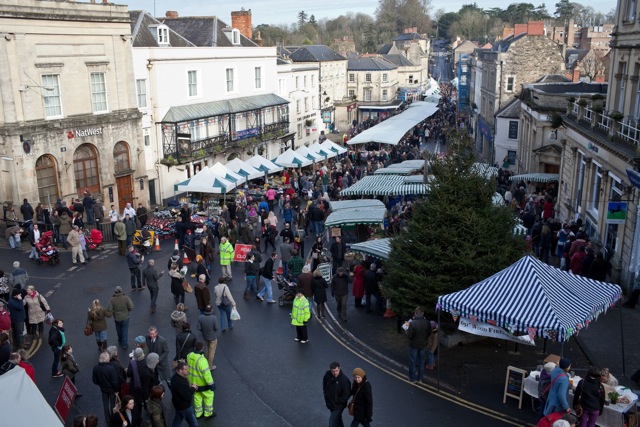 Frome Town Council awaits approval from Mendip District Council to continue the success of the monthly Super Markets this year. It is hoped they will start on the first Sunday in June, running through until Christmas

A GIANT outdoor market that took over the entire town centre last year is set to become a permanent monthly fixture in the Frome calendar.

Frome Town Council has revealed ambitious plans to make the ‘Frome Super Market’ a regular monthly event – taking place on the first Sunday of the month, between June and Christmas. The plans are part of a wider effort to regenerate Frome town centre including a revamp of the Market Place, the river frontage and the Wednesday and Saturday markets.

The Frome Super Market proved a huge success when it was trialled in 2012 – attracting thousands of shoppers to the town.

Before a June launch date can be pencilled in for its relaunch, the town council must first get approval from Mendip District Council as they hold the market charter.

“It dramatically increased visits to Frome, showing people what we have to offer. The response and feedback we’ve had from local businesses shows it has helped to boost the local economy and establish Frome as a tourist destination. We’re confident Mendip District Council will back us on continuing to develop on this success.

“We had hoped to be able to start the markets in April this year, but it’s taken longer than anticipated to review feedback and get everything just right.

“In 2014, however, we hope the event will be extended – starting in March and finishing in December.”

Frome Town Council is proposing to make the market a company limited by guarantee, so it can source funding from external sources – much like the town’s Artisan and Flea Markets.

Mr Wheelhouse added: “Ultimately we’re confident the Frome Super Market will become a profitable business, which can reinvest its profits back into the town.”

Dan Price of The Somerset Deli, who runs a market stall specialising in locally-produced cheese, took part in last year’s trials of the Frome Super Market. He said:

“These events not only encourage a great atmosphere in the town, they attract a lot of visitors, who we can then talk to about the Frome People’s Markets, on Wednesday and Saturdays.

“The super markets not only support our individual businesses, but help keep Frome thriving as a market town.”

A pop-up park and ride scheme that was trialled during last year’s Frome Super Market is also set to return on a permanent basis in June.

Frome Town councillors are now hoping that they’ll be given the green light from Mendip District Council to realise their further ambitions for the Sunday super markets.

“We’re a town that’s known for doing things a bit differently and this event really has got us talked about. It’s very clear we’re onto a good thing here – even Bath has launched a similar weekend market” commented town councillor Peter Macfadyen.

“With the backing of Mendip District Council, we can hope to keep developing this event, making it better and better for everyone involved.”