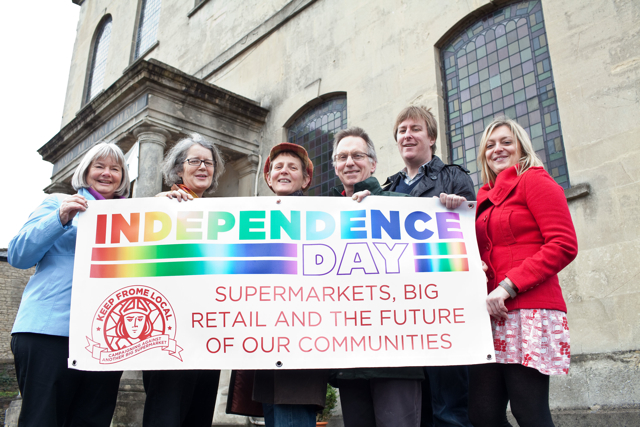 Two years ago, a group of people in Frome got together, following concerns over a planning bid from a large supermarket chain.  Two years on, that group, Keep Frome Local, continues its campaign against yet more supermarket expansion into Frome, but has stepped things up.

Later this month, it will host Independence Day, Frome’s one-day event about the future of town centres and campaigning against supermarket expansion.  The first UK event of its kind, it’s received an overwhelming amount of support and has also attracted lots of regional and national media attention.  It’s been a task to organise, but is already proving worth the effort.

There are campaign groups like Keep Frome Local in virtually every town across the country; people from these and small businesses are coming along on Saturday 17th (November).  The support the event has received from Frome residents and businesses has been huge.

The day will be split between main debate sessions with Independence Day’s impressive line up of speakers, and breakout sessions focused on issues such as the future of food, how to campaign against big retail and the future of the High Street.  A lot has been packed in.

Why now?  Well, it’s a good point at which to ramp up the campaign, taking into account the national picture of changing high streets – and more specifically, the omnipresent supermarket planning application, which won’t go away.  Challenging these and understanding the issues involved, is to put it mildly, mind boggling.  Bringing campaign groups together, to share experiences, as well as information on particularly complex areas such as the planning system is proving a crowd pleaser.  Knowledge is definitely power when supermarkets plan on coming to town.

Also, it’s expected that a developer will announce plans for the Saxonvale site in Frome before Christmas.  So making a big splash with Independence Day will help to amass information and provide people with more on how to stand up for the interest of their town, if they want to.  We’re realising many people do, but need help with the “how” and “what can we do about it” questions.

Totnes, which recently fought off a Costa Coffee will be part of the day’s proceedings.  There will be advice too from 38 Degrees, the national campaigners who led opposition to the government’s sell-off of UK forests.

Independence Day is happening from 10.30am to 4.30pm on Saturday November 17th, at the Wesley Church in Frome.  Tickets cost £11 and if you’re in Frome, can be bought from Frome Wholefoods on Cheap Street, or via the Cheese and Grain.

Hope you can make it.  For more details on the event, visit independenceday2012.co.uk.  There will be live tweeting – follow the debate using #ID2012.