Press release issued for the Inn at Freshford, a country pub which will again play host to Pie Fest – Bath’s first pie festival 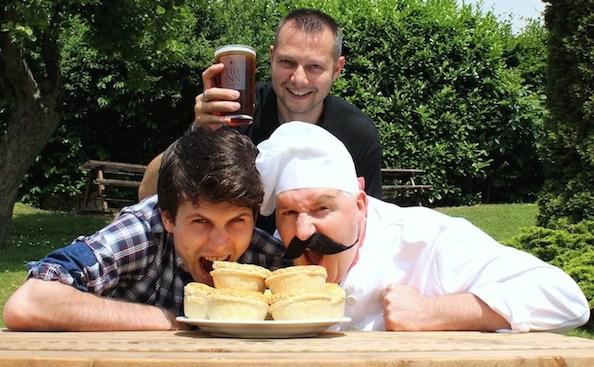 PIE lovers will munch it out in a bid to be crowned the 2014 Man vs Pie champion on Saturday September 13 – when Pie Fest returns to The Inn at Freshford for its second successive year.

Pie Fest II, Revenge of the Shortcrust – as it is being dubbed by its organisers – is a free, one-day family festival celebrating savoury and sweet pies in the build up to British Food Fortnight.

The party of pies will take place in the beer garden of the historic village inn. Revellers will be able to enjoy a menu stuffed with homemade pies, complementary guest ales, live music, a pie bake off competition and the second annual Man vs Pie eating contest. The event will also be used to raise funds for Freshford Church of England Primary School and the Wiltshire Air Ambulance.

Last year Robin Wells, of Frome, devoured seven pies in just ten minutes to be crowned Bath’s first Man vs Pie champion. This year he’s pledged to push his appetite to the limits once more in a bid to defend his title.

“I’ve been on a strict diet of apple and pork pies for the last three months in preparation for Pie Fest II,” admitted Robin.

“I’m confident I can retain my crown, despite rumours of challengers travelling from across the globe to take my crown.”

One such entrant is Peter Pietrovsky, a 40-year-old Siberian pie maker. Peter will be guest of honour, compère and a contestant in this year’s Man vs Pie contest.

Peter said: “My family have been pie makers since the Huns ruled the Siberian Traps.

“Every pie ever invented derives from my family’s recipe” he claims. “Unfortunately during the Cold War pie spies from the West stole my family recipe in an attempt to pass the pie off as a traditional British dish.

“I am flying into the UK especially for the famous Man vs Pie contest and I have pledged to win the competition for Siberia and my family’s name.”

Entries for this year’s Man vs Pie contest at Pie Fest are now open. The winner will receive a Box Steam Brewery gift-set, a £50 bar tab and the illustrious Pie Fest trophy.

“Festival goers will be able to nibble and mark each entry, with the lucky winner receiving a £50 bar tab and the chance to have their recipe adorn the Inn at Freshford’s Hall Of Fame board.”

Those who do not have an appetite for Man vs Pie can instead choose from seven varieties of home-baked pies, nine guest ales and three guest ciders while enjoying ‘pie-nics’ and live music in the Inn’s beer garden. Children, meanwhile, can enjoy a bouncy castle, pie arts and face painting.

Pie facts
• Pies date back to about 9500BC in New Stone Age, – that’s about 5000 years before man invented the wheel.
• Modern-style pies originated in Ancient Greece as a useful means of transporting food on long sea journeys.
• The first reference to pies in England ‘occurred in the 14th century – albeit in Latin as ‘pyes.’ Even literary greats such as William Shakespeare mentioned pies in his plays.
• The word ‘pasty’ began life as a term for a game filled pie, baked without a dish. The history books show Henry VI was served a partridge and peacock-filled ‘pastie’ aged eight-years-old.
• It wasn’t until the 17th and 18th century that pasties were taken up by Cornish miners, who filled one half with meat and the other half with jam – providing both a main course and dessert for their subterranean work.
• The phrase ‘to eat humble pie’ comes from umble pie, a pastry-based dish filled with chopped or minced innards. The word umble derives from ‘numble’, meaning deer’s innards. The cheap offal filling meant it was more commonly eaten by the poor. Despite it being a seemingly humble meal, there is no etymological link between ‘umble’ and ‘humble’.
• The mince pies we eat at Christmas today date back to 13th century when European crusaders returned home from the Middle East with recipes containing meats, fruits and spices. Up until the Victorian age, festive mince pies often contained beef, veal or mutton.
• In the 17th century mince pies were banned by Oliver Cromwell.
• Pork pies make up £145 million of a £1 billion pie industry in the UK.